WASHINGTON (August 31, 2011) – A coalition of students, faculty and organizations called the Textbook Rebellion today kicked off a six-week, cross-country tour to raise awareness of the high cost of college textbooks and advocate solutions.  With events planned at 40 campuses in 14 states, the tour features two mascots – ‘Mr. $200 Textbook’ and ‘Textbook Rebel’ – in spectacular larger-than-life costumes, who will help local volunteers distribute cost-saving tips and collect petition signatures.

At the tour’s first stop, the University of Maryland College Park, coalition members, including the Student PIRGs, Flat World Knowledge and the local student government, were joined by Hal Plotkin, Senior Policy Advisor at the U.S. Department of Education, to mark the official launch.  A common goal was supporting open educational resources (OER), learning materials that are freely available for everyone to use.

“Open Educational Resources are critical in helping us meet the President’s 2020 goal: to make America number one in the world for college graduates,” said U.S. Secretary of Education Arne Duncan in a statement. “These free resources can create high-quality educational opportunities for students, veterans and returning workers, grow our economy, and help us out-educate, out-innovate and outcompete the rest of the world.” 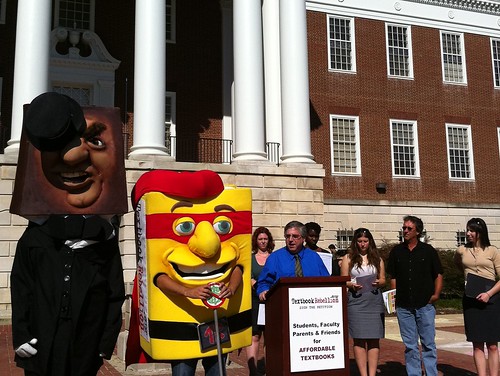 Above: The Textbook Rebellion mascots stand alongside students, faculty and Hal Plotkin from the U.S. Department of Education at the kick off of the fall tour at the University of Maryland.  Credit: Textbook Rebellion, available under the Creative Commons Attribution 3.0 License.  See http://www.flickr.com/textbookrebellion for more photos.

Over the next six weeks, the Textbook Rebellion aims to collect 10,000 petition signatures calling on decision-makers to prioritize open textbooks, a type of OER that is rapidly gaining traction at colleges nationwide.  Open textbooks reduce costs 80% on average over traditional, expensive textbooks.

“Students are really suffering,” said Samantha Zwerling, Chapter Chair for MaryPIRG and sophomore at the University of Maryland.  “However, we are also in a position to usher in change.  The Textbook Rebellion tour gives students an opportunity to participate in the movement and to raise awareness of new options, like open textbooks, that are already out there today.”

A new survey released by the Student PIRGs found that 70% student respondents reported not purchasing one or more of their assigned textbooks because the cost was too high.  Of those students, 78% said they generally believed that they would do worse in a course without the required materials.

“There’s a growing awareness among professors that textbook costs are an increasing financial burden on students,” said Dr. Charles Stangor, Professor of Psychology at the University of Maryland and author of an open textbook published by Flat World Knowledge.  “What we need are high-quality, affordable options, like open textbooks and other open resources, that give all students access to the knowledge they need to succeed in their courses.”

The Textbook Rebellion was created earlier this year out of widespread frustration with the skyrocketing cost of college textbooks.  Prices have been rising more than four times the rate of inflation for the past two decades. The College Board estimates that the average student will spend $1,137 on textbooks each year.  Unnecessary new editions, expensive bundles and e-books that expire are common publishing industry tactics to further increase costs.

“In an economy where a college degree is practically a necessity for securing a good job, students need to be able to afford the course materials they need to learn in school,” said Jamil Scott, Vice President of Academic Affairs for the Associated Students of the University of Maryland College Park.

The Textbook Rebellion coalition released the schedule for the 40 events of its fall semester tour.  Contact Nicole Allen at 401-484-8104 or [email protected] for event details.

Click here for the latest version of the tour schedule

About the Student PIRGs

Textbook Rebellion is a movement of students, faculty and others affected by the high cost of textbooks working toward affordable solutions.  Leading coalition partners include the Student PIRGs, Flat World Knowledge, Campus Progress, Rock the Vote, World Wide Center of Mathematics and student government associations.  For more information, visit www.textbookrebellion.org or contact James Nabholz at 914-575-9479 or [email protected]